I really like WPF for showing directly in the Visual Studio Output folder all binding errors, but one annoying stuff is that the output windows is usually crowded with all sort of stuff, so you have an hard life identifying the binding errors from all the other output contained in there. Since Visual Studio 2010 use WPF to render the output windows and use MEF for extension, modifying the aspect of the content of VS2010 is really simple. So I’ve created in few minutes a simple addin to hilite the databinding error in output windows, the example is based on the Diff Classifier SDK sample, that explains how to use the text classification feature of VS2010

First of all create a new Visual Studio Package project

Now you should add a couple of classes to the project that actually does the coloring for you.

Figure 2: The CustomClassifierProvider will provide the entry point for modifying aspect of output window

Then you need to go to the source.extension.vsixmanifest file and add the project as content for MEF exporting like shown in Figure 3.

Figure 3: Remember to add the whole assembly as MEF Component

To have this, simply press the “Add content” button and you can specify everything in the windows shown in Figure 4: 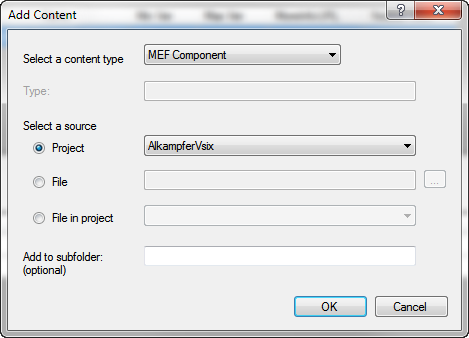 Now you only need to write the class that actually does the formatting, I called this “OutputClassifierProvider” and it is very simple. It simply implements the IClassifier interface, thus it can give classification to text in Visual Studio, here is the first part of the class.

The real work is done into the GetClassificationSpans method.

As you can see it is based on a simple static ClassificationTypeDefinition property then a class that inherit from ClassificationFormatDefinition and the game is done. Now you can press F5, start Visual Studio in Experimental Hive, open a wpf project with binding errors, run and look at you new colored output folder.

Figure 5: Binding errors are now hilited in the output folder.

It is amazing how simple is to extend VS 2010 thanks to MEF.