To avoid creating unnecessary build definition, it is a best practice to allow for parameter overriding in every task that can be executed from a build. I’ve dealt on how to parametrize tests to use a different connection string when tests are executed during the build and I’ve used Environment variables for a lot of reasons.

Environment variables are not source controlled, this allows every developer to override settings in own machine without disturbing other developers. If I do not have a MongoDb in my machine I can simply choose to use some other instance in my network.

Noone in the team is affected by this settings, and everyone has the freedom of changing this value to whatever he/she like. This is important because you can have different version of MongoDb installed in your network, with various different configuration (MMapV1 or Wired Tiger) and you want the freedom to choose the instance you want to use.

Another interesting aspect of Environment variables, is that they can be set during a VSTS/TFS build directly from build definition. This is possible because Variables defined for a build were set as environment variables when the build runs.

If you allow this value to be allowed at Queue Time, you can set the value when you manually queue a build. 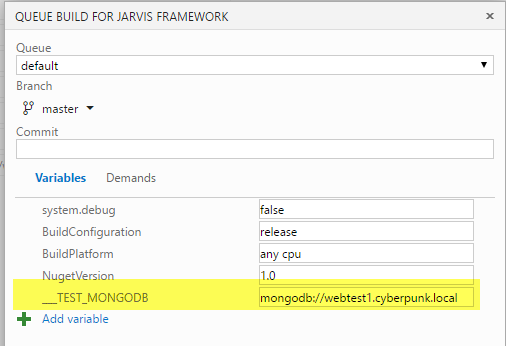 If you look at Figure 3, you can verify that I’m able to change the value at queue time, but also, I can simply press “Add variable” to add any variable, even if it is not included in build definition. In this specific situation I can trigger a build and have my tests run against a specific MongoDb instance.

Remember that the value specified in the build definition overrides any value that is set on environment variables on build machine. This imply that, once you set a value in the Build definition, you are not able to change the value for a specific build agent.

Another interesting aspect of Environment Variable is that they are included in agent capabilities, as you can see from Figure 4.

Figure 4: All environment variables are part of agent Capabilities

This is an important aspect because if you want that variable to be set in the agent, you can avoid to include in Variables tab, and you can require this build to be run on an agent that has TEST_MONGODB environment variable specified. 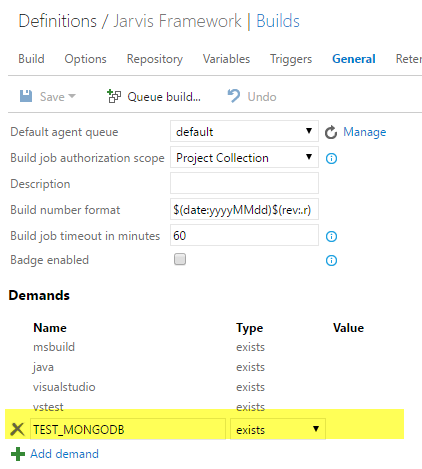 Figure 5: Add a demand for a specific Environment Variable to be defined in Agent Machine

Setting the demands is not always necessary, in my example if the TEST_MONGODB variable is not definied, tests are executed against local MongDb instance. It is always a good strategy to use a reasonable default if some setting is not present in Environment Variables.