I’ve decided to move to a 500 GB SSD to have plenty of space to store my virtual machines. At the time of the decision, Samsung EVO was the better option. I’ve posted in the past benchmarks for my Vertex4 256 GB 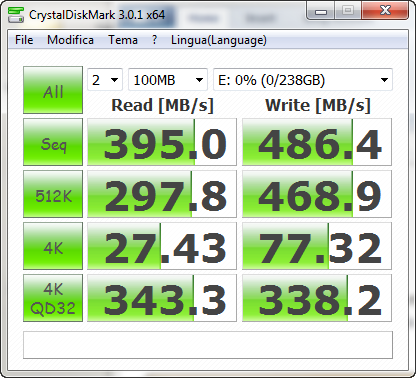 And I was really curious about performance of Samsung EVO. Vertex 4 has a real impressive write speed, even if after one year of use if you test it again you can find a decrease in performance. Running test on the Evo gave me these results. 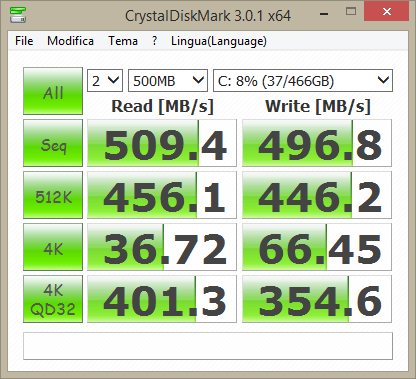 Actually it seems to outperform the Vertex 4 and this makes me really happy, because I feared that the Evo would have been a little slower in writes than Vertex 4, but it seems to be surely comparable. This test was also done with a 500MB file size while the original Vertex 4 test has 100MB file size, for the sake of comparison I decided to run another test with the same 100MB setting, but the result is substantially the same (little standard fluctuation of numbers)

Samsung has also a nice feature in his Magician software for Evo SSD, that can actually use system RAM to further improve performance of SSD. Magician software has also a nice feature to upgrade firmware of the SSD directly from your Windows operating system even if it is system disk. Creating a bootable CD or Usb stick with firmware update program is not a big problem, but pressing a button and having your firmware update is a nice facility.

After updating firmware and some OS optimization suggested by magician software I re-run the test again, just to see if there is anything changed (I’m not expecting any substantial changes). Here is the result if you are curious. 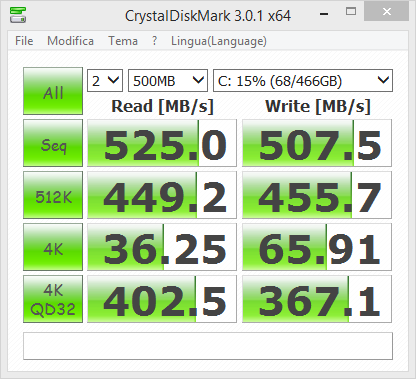 As expected the data are substantially the same, some little fluctuation are quite standard. Then I decided to enable Rapid mode, a technique that uses computer RAM to accelerate disk operations. I perfectly know that such kind of optimization should be tested in everyday use, but I decided to have another run of CrystalDiskMark to understand what happened. Here is the result 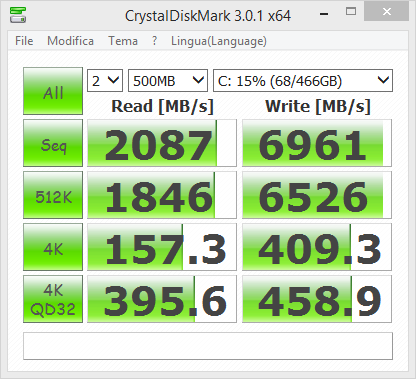 I really must admit that I found difficult to really squeeze something out of this numbers, the increment in the diskmark is probably due to how the test is performed and I doubt that this is a “real” improvement in the everyday use, but I’ll leave it enabled just to understand if I’ll perceive some “change” respect having it not activated.