During the official Launch of Visual Studio 2013 a lots of news were announced, but one of the most interesting is Visual Studio Online (Previously Known as TF Service). This is not only a simple rebrand of a product, the change of name indicates also that the service is not only a TFS hosted on Azure but it contains lots more functionality. You can find some quick introductory videos in Channel9.

If you followed all the news about TFS 2013 and VS 2013, you should be aware of the ability to run Load Test in the cloud introduced with VS Ultimate 2013. This capability is available only if you are connected to a valid Visual Studio Online account and it has nothing to share with Team Foundation Server. This suggests you that a Visual Studio Online account is something “more” than a simple TFS hosted on Azure , because it contains other services.

With the launch of VS 2013 in New York the team revealed another interesting service called “Application Insight”, a service that you can use to monitor health, performance, user interaction and much more metrics of your web applications. If you are interested in such features I suggest you to look at some video in Channel 9.

Another interesting feature is Visual Studio codename Monaco, an online IDE, available at this moment only for Azure Web Sites. It is still in early preview, but it permits you to modify an Azure Web Site directly from a Web Browser, and publishing simply pushing to a hosted Git Repository.

Another great news is the Release Management Tool, formerly known as InRelease and now rebranded and included in the standard family of Visual Studio ALM Tools. Thanks to this tool TFS finally fill the gap of Release Management and now you are able to define release workflow and environment to manage the release process of your artifacts, in production and staging environments.

Another important news is the announcement of Prices of Visual Studio Online account, you can find all the information directly on the site. If you already have a xxx.visualstudio.com account, you should see another top level menu called User, that permits you to manage all the user that will have access to the service, with related type of access. 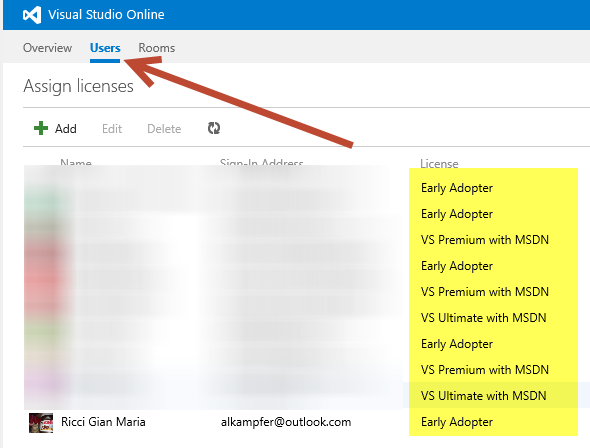 You can add 5 basic users for free, each one that has an MSDN Premium or Ultimate or Test Professional can access your service and you will pay for other user if you need them.

All the details are in the site http://www.visualstudio.com that was completely redesigned to give you all the information you need.