I did not like Git, it is a really personal opinion, but I work a really limited time on github project with some friend of mine and I always find surprise using git, surprises that never happened with other SCS (Hg, Subversion, TFS, etc).

Today I modified a file in my working copy, but after some code I want to revert to the original version, so I issue the revert command with tortoise Git. 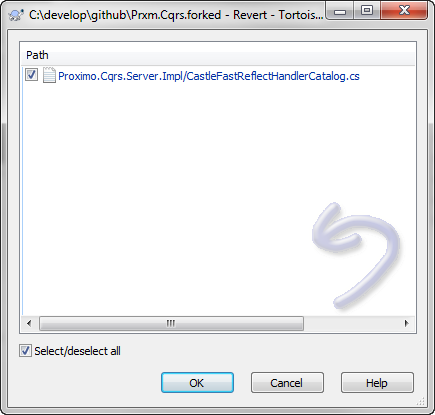 Now I press Ok, I got this nice confirmation dialog

Figure 2: Confirmation dialog that confirm me that the file was reverted.

Now I reopen the solution in Visual Studio but the file is still modified and if I right click on the repo folder and choose again Revert from TortoiseGit I got the very same situation in Figure 1, Tortoise Git is telling me again that the file is modified and it can be reverted.

Then I issue a git reset –hard command but it does not work.

I know that I have a really little knowledge of git because I used it 10 times in a year, but I never find another source control that tells me “hey your file is reverted” but in reality nothing happened.