I’ve learned in the past a precious rule about hardware: try to imagine how you will use your pc in at least one or two years period before thinking to buy some piece of hardware.

I remember a lot of years ago, when I bought a pc with a 1.6 GB Hard Disk, a size that was really big for these period, when standard pc had 512 MB Hard Disk or less. I remember a couple of friends of mine told me “why you spent money on such a big Hard Disk, it is really too big, you will never need such a big space”. After one year, I ran in those machine a partition of Windows 95, one for DOS, a stable partition with Linux Slackware distribution and a fourth partition to experiment the new distribution of linux that we downloaded from the university. I’ve plenty of space while my friends strived themselves to keep everything inside 512 MB.

Today I installed a virtual machine to experiment TFS 11 and saw that during installation of SharePoint foundation there is a warning telling me that 10GB RAM is suggested for best experience, so I go to VM setting, and gave 12 GB of RAM to the VM. :) 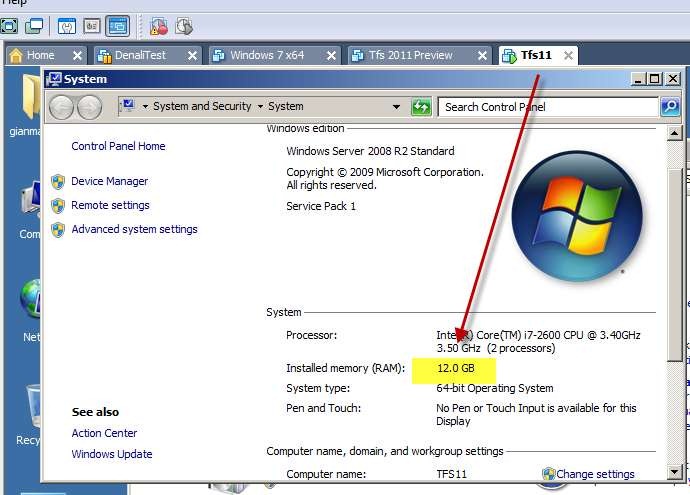 Actually there is no need to have 12 GB to experiment with TFS11, a 4 GB machine will be enough to create a test environment, but having 16 GB of ram and an SSD on my machine permits me to play with a superfast test TFS 11 machine.

And I rethink to a couple of friends of mine, that 4 month ago told me that spending money on 16 GB of ram is not so useful, because 8 GB is surely enough for any usage :).

Now I’m moving toward a QNAP External HD case, and probably for Christmas another SSD (A Vertex 3) :P, I love hardware.