In previous post I showed how to setup a build in tfs that not only builds the solution, but also runs all the tests. The next step is to configure how tests are run and reacting to test result. The first thing I want is the ability to make the entire build fail if one of the test fails. As you see in the previous post, the default behavior of the build, is to partially fail if one or more tests fail.

This kind of option is not present in the wizard, and it is time to make your hands dirty. To unleash the full power of team builds, you need to know msbuild, in order to configure the build editing the msbuild file of the team build. First of all go to the team explorer, open the source control node (step 1), here you will find a folder named " TeamBuildTypes (step2) that contains a subfolder for each build definition, in the BuildWithTests folder there are a couple of file, the one named TFSBuild.proj (Step 3) is the one that contains all operations of the build.

In order to edit that file, you first need to grab a copy from the source control to your local folder, simply right click in the teamBuildTypes folder to Get the latest version

Ok now you can double click the tfsbuild.proj file to edit it. This is a simple msbuild file, and in the first lines you find this instruction

it imports a file called Microsoft.TeamFoundation.Build.targets that contains base targets for a build definition. This file permits you to override some specific target to execute custom code in specific moments of the build process. You can find a list of overridable targets here. From that list you can verify that there is a target called BeforeTestConfiguration that can be used to specify some custom configuration for test execution.

To fully understand how overriding works, you can open the Microsoft.TeamFoundation.Build.Targets file and look at the BeforeTestConfiguration target.

Since its only purpose is running your own code, it contains no task. Then you can verify on how it is used by the basic test runner task.

Ok this is exactly what we need, the Continue on test property is set to true or false depending on the StopOnTestFailure variable. Another interesting piece of code is this one

That shows you an interesting property called TreatTestFailureAsBuildFailure , that is initially set to false. Now you have every information needed to solve the original problem, you can simply edit TFSBuild.proj file inside the definition of your build, and add this code, after the import statement of the file Microsoft.TeamFoundation.Build.Targets.

As you can see, overriding a target is done simply redefining it in the build file. With this simple addition, the msbuild engine will call your BeforeTestConfiguration task that sets the StopOnTestFailure property to True and the TreatTestFailureAsBuildFailure also to true, thus asking to msbuild to make the entire build fails when the test task fails. Now if I fire a build with a failing test I see. 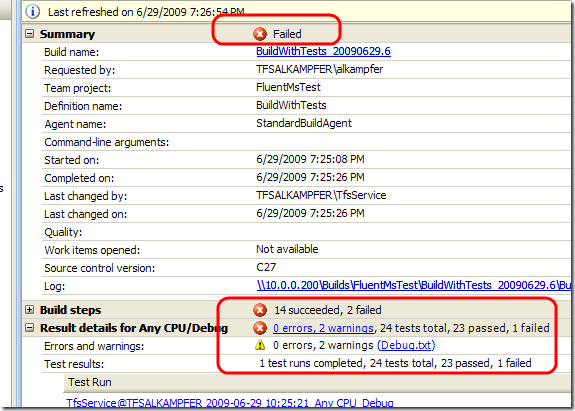 As you can see the entire build is considered to be failed, because we override the BeforeTestConfiguration. If you click on the Log file you can find the Message that confirms that your override task was really called.

Configuring Tfs build is quite simple, it is only a matter of overriding certain specific targets to insert custom msbuild code in the main build process.